Doodling My Way to Rest & Play

I found an old relic of a thought this week.

It’s something my second-grade teacher said to me as I was drawing a poster-sized clown in art class, and it’s apparently been lurking in my creative subconscious ever since:

Erm… What?
No wonder I stopped sharing my doodles long, long ago.

I remember that being a damn fine clown—much finer without the lines that didn’t add to my red-nosed vision. But like a scratched LP, my brain has repeated that teacher’s proclamation and I’ve been afraid of making a mistake because I (obviously!) could never erase it.

In honor of finding that creativity-squashing BS sitting in my psyche, I pulled out my finest eraser and put it to work in a doodle journal. Then I dared myself to post something (anything), erased lines and all, to Facebook.

The “Clean” Loop of Faith 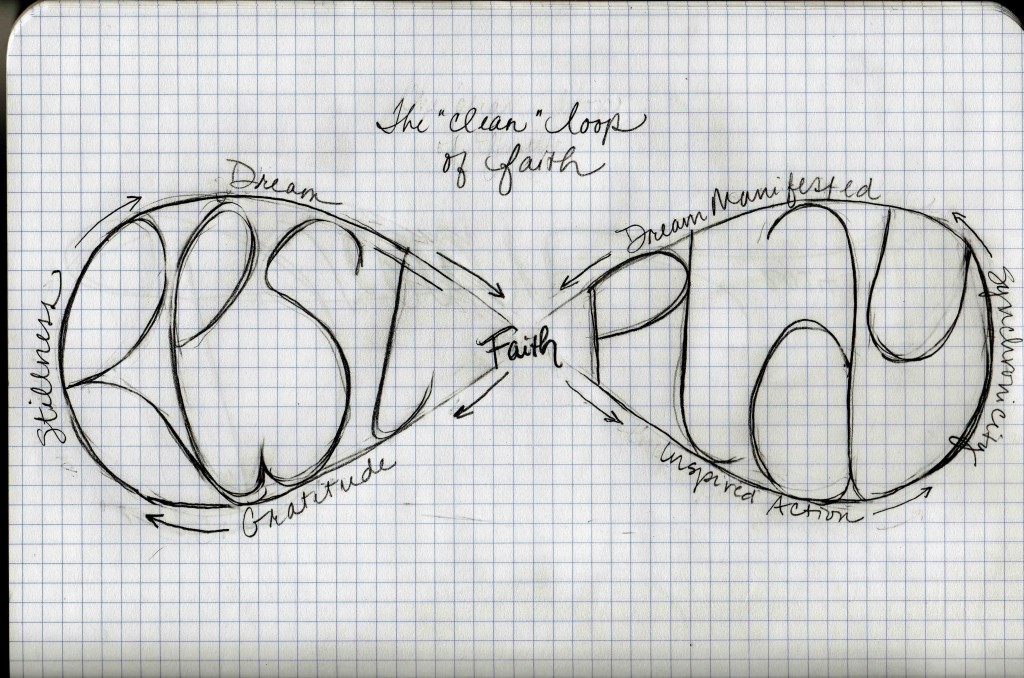 Since it was New Year’s Day, many people were posting their “word/theme/song” for the year. Deciding that I wanted an image for the year rather than a word, I doodled what I hoped the year would feel like. A “clean” loop of faith. A “continuous loop between rest and play” as Martha Beck likes to call it – when life is sustainably running smoothly, playfully, and profitably.

Taking my own dare, I posted it.

The smudged unfinished look. The imperfection in the lines. The fear of being judged.
It felt like play to draw it. It took a leap of faith to post it.

What had stopped me from sharing something like this in the past?
The smudged unfinished look. The imperfection in the lines. The fear of being judged.
Not drawing it felt like hiding. A lack of faith prevented me from sharing it.

A change in perspective about eraser lines changed everything.

Employing my trusty eraser, I doodled a bit more. Here’s what my world looks like when I lack faith in myself, others, God, the Universe, or whatever else has the power to pull me through: 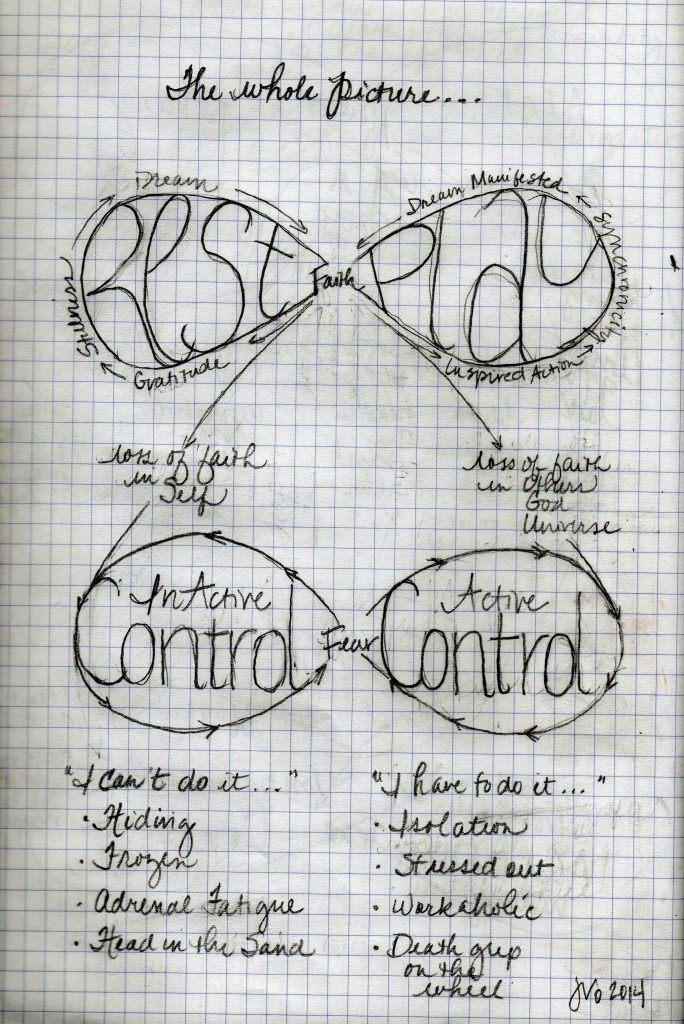 When I lose faith, I drop from the top loop of cathartic rest and joyful play to the bottom loop of fear and control. My goodness, have I mastered both sides of this loop! The passive, inactive, “avoid at all cost any situation that might result in judgement” loop sits on one side and the side, while the overactive workaholic occupies the other.

So how do you return to the “clean” loop of resting and playing? 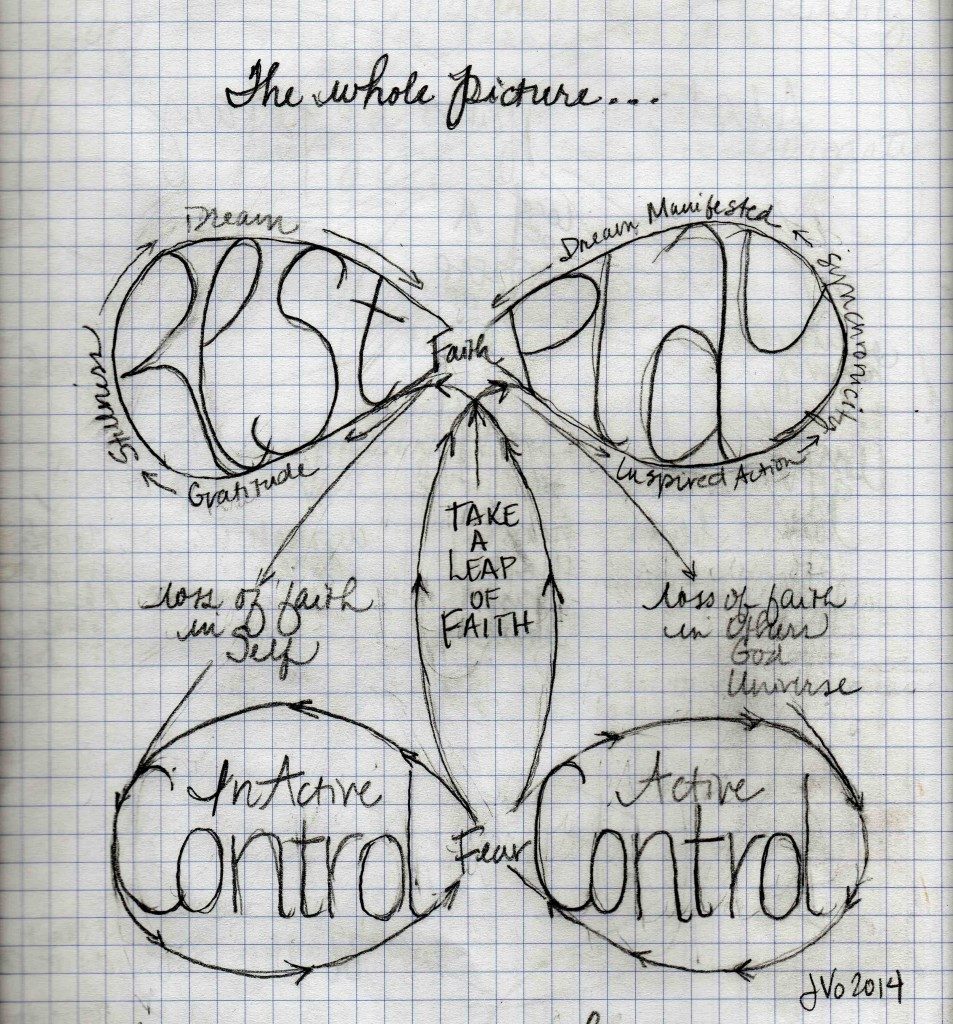 In this instance:  I challenged my second-grade story that real artists don’t have erasers and threw something out there for the sake of being able to play with my friends. Play before perfection is way more fun.

I even leapt over the “word of the year” convention when I noticed that what called me was an image for the year. Honoring the desire to create an image for the year was having faith in my vision. And faith in your vision can lead to far bigger things than a Facebook post with lots of comments.

Which means we’ll need a much bigger eraser. We’ve got lots of doodling to do!

In Truth & With Love,

This website uses cookies to improve your experience while you navigate through the website. Out of these, the cookies that are categorized as necessary are stored on your browser as they are essential for the working of basic functionalities of the website. We also use third-party cookies that help us analyze and understand how you use this website. These cookies will be stored in your browser only with your consent. You also have the option to opt-out of these cookies. But opting out of some of these cookies may affect your browsing experience.
Necessary Always Enabled

Any cookies that may not be particularly necessary for the website to function and is used specifically to collect user personal data via analytics, ads, other embedded contents are termed as non-necessary cookies. It is mandatory to procure user consent prior to running these cookies on your website.